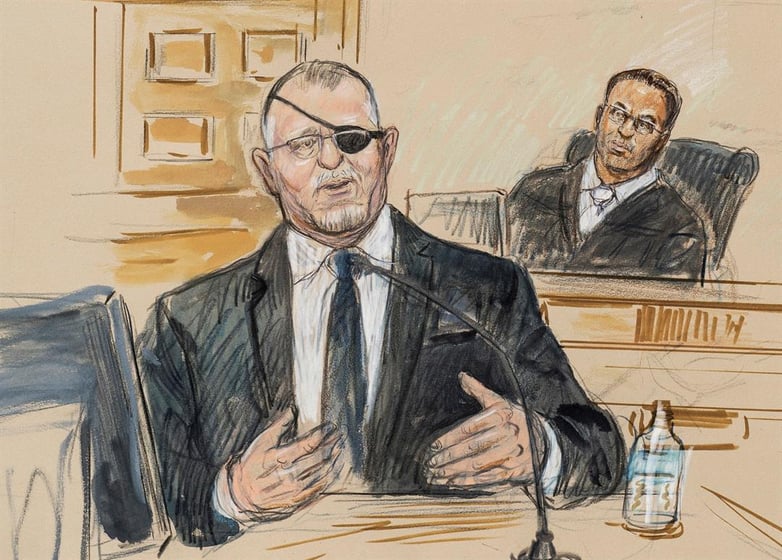 This artist sketch depicts the trial of Oath Keepers leader Stewart Rhodes, left, as he testifies before U.S. District Judge Amit Mehta on charges of seditious conspiracy in the Jan. 6, 2021, attack on the U.S. Capitol, in Washington, Nov. 7, 2022.
Dana Verkouteren via AP

WASHINGTON (AP) — For weeks leading up to Jan. 6, 2021, Oath Keepers founder Stewart Rhodes and four associates discussed using violence to overturn the results of the 2020 election, and when rioters started storming the Capitol they saw an opportunity to do it, a federal prosecutor told jurors on Friday as the seditious conspiracy case wound toward a close.

Assistant U.S. Attorney Kathryn Rakoczy said in her closing argument to jurors after nearly two months of testimony in the high-stakes case that Rhodes’ own words show he was preparing to lead a rebellion to keep Democrat Joe Biden out of the White House. Rhodes and his co-defendants repeatedly called for “violent overthrow” of the U.S. government and sprang into action on Jan. 6, she said.

“Our democracy is fragile. It cannot exist without the rule of law, and it will not survive if people dissatisfied with the results of an election can use force and violence to change the outcome,” Rakoczy said.

The closing arguments began in Washington federal court after the final pieces of evidence were presented in the trial alleging Rhodes and his band of antigovernment extremists plotted for weeks to interrupt the peaceful transfer of power from Republican Donald Trump to Biden.

Rhodes’ attorney sought to downplay his violent rhetoric in the run-up to Jan. 6, describing it as “venting” and insisting there was no agreement or conspiracy. Defense attorney James Lee Bright said Rhodes’ language was focused on persuading Trump to invoke the Insurrection Act over what he saw as a stolen election.

Rhodes “wasn’t hiding his opinions, he wasn’t hiding any plans,” Bright told jurors. He was “as open as daylight with every plan on what he was asking President Trump to do.”

Evidence presented by prosecutors shows Rhodes and his co-defendants discussing the prospect of violence and the need to keep Biden out of the White House in the weeks leading up to Jan. 6, before stashing a cache of weapons referred to as a “quick reaction force” at a Virginia hotel across the Potomac River.

On Jan. 6, Oath Keepers wearing helmets and other battle gear were seen pushing through the pro-Trump mob and into the Capitol. Rhodes remained outside, like “a general surveying his troops on a battlefield,” a prosecutor told jurors. After the attack, prosecutors say, Rhodes and other Oath Keepers celebrated with dinner at a local restaurant.

Defense attorneys have spent weeks hammering prosecutors’ relative lack of evidence that the Oath Keepers had an explicit plan to attack the Capitol. Rhodes, who is from Texas, testified that he and his followers were only in Washington to provide security for right-wing figures including Roger Stone. Those Oath Keepers who did enter the Capitol went rogue and were “stupid,” he said.

Rhodes testified that the mountain of writings and text messages showing him rallying his band of extremists to prepare for violence and discussing the prospect of a “bloody” civil war ahead of Jan. 6 was only bombastic talk.

The prosecutor sought to rebut suggestions that Rhodes’ rhetoric was simply bluster, telling jurors that his messages weren’t “ranting and raving” but were “deadly serious.”

“The way they have appointed themselves to be above the law is why they are here today,” she said. “The sense of entitlement that led to frustration followed by rage and then violence – that is the story of this conspiracy.”

Rhodes’ lawyer said his client was back at a hotel room eating chicken wings and watching TV when the first rioters started storming the Capitol. He noted that the Oath Keepers never deployed their “quick reaction force” arsenal.

“You’re either the Keystone Cops of insurrectionists, or there is no insurrection,” he told jurors, referring to the inept police officers of silent movies.

Two other defendants testified in the case. Jessica Watkins, of Woodstock, Ohio, echoed that her actions that day were “really stupid” but maintained she was not part of a plan and was “swept along” with the mob, which she likened to a crowd gathered at a store for a sale on the popular shopping day known as Black Friday.

Defendant Thomas Caldwell, a Navy veteran from Virginia, downplayed a chilling piece of evidence: messages he sent trying to get a boat to ferry weapons from Virginia across the Potomac into Washington. He testified that he was never serious about his queries, though he struggled to explain other messages referencing violence on Jan. 6.

Two other defendants, Kelly Meggs and Kenneth Harrelson, both from Florida, did not testify. Meggs’ attorney Stanley Woodward argued that there were thousands of people involved, and his client was not among the first people to enter the Capitol.

Closing statements from defense attorneys are expected to continue Monday.

The group is the first among hundreds of people arrested in the deadly Capitol riot to stand trial on seditious conspiracy, a rare Civil War-era charge that calls for up to 20 years behind bars upon conviction. The stakes are high for the Justice Department, which last secured such a conviction at trial nearly 30 years ago and intends to try two more groups on the charge later this year.