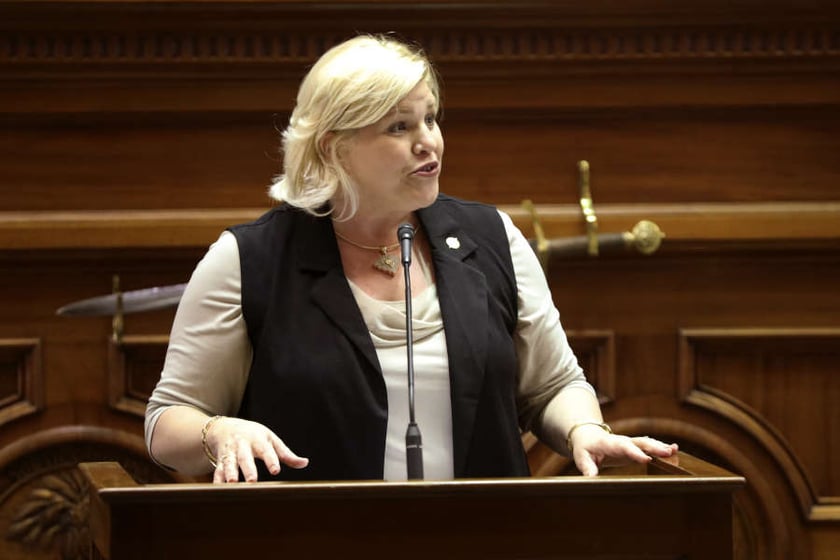 COLUMBIA, S.C. (AP) — South Carolina’s Senate debate on an abortion ban that would no longer include exceptions for pregnancies caused by rape or incest started Wednesday with the chamber’s three Republican women taking a stand against a bill they said doesn’t respect women and doesn’t respect life.

Republicans are facing off against each other over the ban. On one side is a core group that views any abortion as ending a life. On the other are conservatives who have digested developments elsewhere since Roe v. Wade was overturned and say they don’t want 14-year-old rape victims to have to give birth, or force a mother to carry to term a fetus unable to live outside the womb.

Senators have been told the proceedings could last days. If the legislation is approved and signed into law, South Carolina would join Indiana as states that have passed near-total abortion bans since the Supreme Court overturned Roe v. Wade in June.

A first vote to try to add back the exceptions was rejected 23-6. None of the Senate’s Democrats voted, refusing to help more moderate Republicans and to keep the bill as strict as possible to try to defeat it.

Democrats are not going to help Republicans out of a box of their own making by making “an awful bill a very bad bill,” Senate Minority Leader Brad Hutto said.

The three Republican women in the Senate rose early in the debate and and spoke back-to-back, saying they can’t support it unless the rape and incest exceptions are restored.

“Are we simply baby machines? Are you pregnant with a dead baby? Too bad. Raped at 11 by your grandfather and got pregnant? That’s just too bad,” Sen. Penry Gustafson said.

Gustafson watched as the Senate’s longest serving woman, Sen. Katrina Shealy said the 41 men in the Senate would be better off listening to their wives, daughters, mothers, granddaughters and nieces.

“Yes, I’m pro-life. I’m also pro-life for the mother, the life she has with her children who are already born. I care about the children who are forced into adulthood, made up by a Legislature full of men so they can feel good about it,” Shealy said.

Senators who support the ban said the state needs to show it values all life by taking advantage of the opening created by the U.S. Supreme Court.

Sen. Richard Cash compared abortion to slavery Tuesday, asking if “the human being in the womb is nothing more than the property of a woman?”

“Does an unborn human being have the most fundamental civil right of all which is the right to life?” said Cash, who has made ending abortion his chief focus in five years in the Senate.

The same bill without the exceptions appeared to fail in the more conservative state House last week before some Republicans maneuvered through a series of votes to allow abortions for rape and incest victims up to the 12th week of pregnancy.

Democrats — and two Republicans — did weigh in against the bill in a final losing 9-8 vote in Tuesday’s committee meeting that could foreshadow the closeness of any vote in the full Senate.

By then, Democrats had refused to vote on other proposals by Republican Sen. Tom Davis, who has said for weeks that the bill needs to be modified from a total ban before he can support it.

They included assuring that a doctor can perform the abortion if it is determined a fetus has a medical condition that won’t allow it to live — an issue at the center of a federal lawsuit over Idaho’s abortion ban — as well as increasing access to contraceptives and including birth control as part of the state’s abstinence-based sex education.

Those ideas could be taken up on the Senate floor, along with a reconsideration of the rape and incest exceptions in a chamber where 30 Republicans outnumber 16 Democrats.

The bill would ban all abortions in South Carolina except when the mother’s life is at risk. Before they were removed, the bill also included exceptions for pregnancies caused by rape or incest, allowing abortions up to 12 weeks after conception. In those cases, the doctor would have had to tell the patient that the crime and the abortion will be reported, with her name given to the county sheriff within 24 hours of the procedure.

South Carolina currently has a ban on abortions once cardiac activity in a fetus is detectable, which is usually about six weeks. But that law has been suspended as the South Carolina Supreme Court reviews whether it violates the state’s constitutional right to privacy. That leaves South Carolina’s older 20-week abortion ban as the current benchmark.